The Medal of the Royal College of Organists, also known as the the RCO Medal, “recognizes distinguished achievement in one or more of the following areas relating to organ and choral music — performance, teaching, scholarship, composition, organ-building, conducting, administration and philanthropy.”

“We are very proud of Goldman Professor Kimberly Marshall and this recognition of her life’s work as a devoted scholar of the organ, its history, construction and performance practice,” said Heather Landes, director of the School of Music, Dance and Theatre at ASU. “Dr. Marshall models what it means to truly be an artist-scholar by her longtime commitment to the performance and study of the organ, evidenced by her live performances on the world’s most significant organs, her discography of recordings and her books, editions and peer-reviewed journal articles that pass along her research to the next generations of organists.”

Marshall said she received a letter from Gerard Brooks, president of the Royal College, informing her that she was the recipient of the award in recognition of her distinguished achievement in organ performance and scholarship.

“I feel very honored and gratified that they are recognizing my scholarship as well as my concert career,” Marshall said. “I have worked very hard throughout my career to be a scholar and a performer and to use my research into the history of the organ and treatises on performance practice to inspire my work as a performer.” 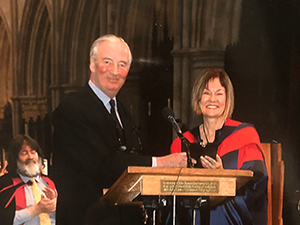 Marshall and seven distinguished musicians, composers and scholars from the fields of organ and choral music received the Royal College’s highest honor. The 2022 event featured presentations to both the 2021 and 2022 RCO Medal honorees.

Marshall is described by the RCO as a “performer, scholar and educator who is a committed advocate of the organ who has worked tirelessly to engage students and audiences in the instrument in all its richness and in its many contexts.”

“I am attracted to the organ by its vast possibilities of timbre and complex development since its invention in the third century BCE,” Marshall said. “My work reflects this enthusiasm for musical creativity and historical awareness.”

To her knowledge, Marshall said she and American colleague and scholar Kerala Snyder are the only two Americans to have received the RCO Medal. She and Snyder have worked together in many different contexts in Europe.

The RCO is considered the queen's college and has an immense library that is open to all members around the world as a resource for research into organ playing, organ history and organ music. The RCO also offers organ lesson programs for a wide range of students, from young people to the elderly.

Trained in Europe, Marshall studied in England, France and Italy, and received her doctorate from the University of Oxford. She was appointed an assistant professor at Stanford University and co-created the Organ Research Center there. After teaching and researching in Australia, she was recruited to serve as dean of postgraduate studies at the Royal Academy of Music in London. She also served as project leader for the Organ Research Center in Gothenburg, Sweden. She has had a very active career in England and a long history with English organists and organ scholars, and has taught master classes for the RCO and been published in their journal.

Marshall joined Arizona State University in 1998 to oversee the organ studio and preside over the newly acquired Fritts organ. She served as director of the former School of Music from 2006–2012. Marshall said she has tried to incorporate European modes of pedagogy in the organ program she has developed at ASU.

A large part of Marshall’s research has been on the earliest organs and their repertoire and techniques. She has presented concerts, workshops and lectures on early music and is considered a leading expert on the organ and its repertoire. She has performed on the world’s most famous organs, including at Notre-Dame in Paris, St. Paul’s Cathedral in London, the Washington National Cathedral and on the Hildebrandt organ in Naumburg, Germany, which J. S. Bach himself examined in 1746.

Marshall said at times during her career she was torn between her scholarship and her performance, but is grateful that she pursued both paths simultaneously.

“I have really been able to see the results and bring both together in my teaching,” Marshall said. “I think that this is one thing that distinguishes my program at ASU from other American organ programs. We are trying to foster a culture here that shares ASU’s amazing organs with both local and global communities through performances, recordings and publications.”